Kiwi Venture Partners, a Georgetown-based outfit launched by Cooley LLP's Carl Grant and two executives from mobile development firm KiwiTech, has closed an inaugural $2.5 million fund with plans to prove out its unorthodox approach to deal flow and due diligence. 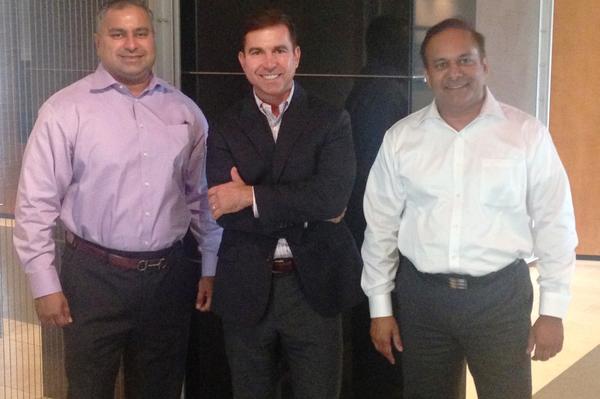 The fund formally closed last last week, although its founders have already inked seven investments in recent months. Their strategy: quickly generate exits by swinging for "base hits," taking significant equity stakes through investments ranging from around $100,000 to as much as $500,000, said Neal Gupta, managing director of KiwiTech and one of the fund's co-founders.

Joining him in launching the fund is his brother, KiwiTech CEO Rakesh Gupta. The two have known Grant, Cooley's executive vice president of business development and a well-known presence in the D.C. tech scene, since the late 90s.

The fund is an outgrowth of KiwiTech's policy of letting some of its startup clients pay them in equity alongside cash, which began when one such customer, edutainment app-maker Ruckus Media Group, couldn't pay a half million dollar bill. KiwiTech took a convertible note instead, according to Neal Gupta, and went on to take a majority stake in the company last year as part of a turnaround effort.

Kiwi Venture Partners represents a formalization and expansion of that approach. "We realized that by virtue of getting this equity stake, we could do a lot better than just picking up a small piece for the services work," he said. All but one of the seven investments is a result of KiwiTech's prior development work for the company. Those relationships give the fund access to a unique flow of investment opportunities, as well an insights into the companies themselves. Working with a startup from six months to a year beforehand provides an inside track that serves as an extended due diligence on the entrepreneurs.

The fund's investments come on top of those made by KiwiTech directly. Limited partners (LPs) have also made their own "sidecar" investments directly into the startups, according to Neal Gupta.

The $2.5 million was raised from two dozen limited partners, half of them from the D.C. area, according to Grant, who works out of Cooley's Reston office. Rakesh Gupta operates out of New York, and Neal Gupta out of the San Francisco Bay Area. Neal and Rakesh also co-founded publishing services company Aptara in the late 1980s.

Capping the fund at a small sum was intentional, meant as a proof-of-concept to demonstrate the model can quickly generate returns for LPs. The small size means it won't need blockbuster acquisitions or initial public offerings to be successful. "We're not focused on getting to a 50X or a 100X [return], we're not swinging for the fences," said Neal Gupta. Even though he expects some large exits, "we don't need the home runs like the average fund would need it."

A Comprehensive List of UX Design Principles for Startup Website and Blog
What You Should Know About Regulations in a Web 3.0 World
How DeFi and Web 3 Could Shape the Future of Finance